The feral pigeon is a descendant of the domestic homing pigeons introduced to Australia from European settlers.
Feral pigeon flocks have increased in numbers and dominate the urban landscape, agriculture and country towns due to the availability of:

No access to water or food.
Secure breeding sites.
As a result, there has been an increase in feral pigeon numbers in many of our cities and towns.
Action needs to be taken to help rectify the feral pigeon problem before the problem escalates.

They have a life span of 3 to 4 years in the wild and up to 16 years in captivity.
Pigeons are monogamous. A mating pair will have 3 to 4 broods per year of 1 to 2 eggs each.
Eggs are a solid white colour. They hatch in 18 days.
The young leave the nest within 35 days.
Pigeons do not migrate. They stay near their birth site (which may be your home).
Identifying a feral pigeon
The standard feral pigeon is generally:
Blue-grey with a white rump
Has iridescent feathers on its head and neck
Has 2 broad black bars across each wing
Has a broad dark band across the end of the tail.
Feral pigeons can also display white, brown or grey plumage.

The presence of pigeons can result in a range of problems.
When it comes to birds, there may be more than just avian flu to be worried about. It has been suggested that there are over 60 other diseases that birds and their droppings can carry. The problem is especially worrisome in residential areas, as many of them are airborne and can be transferred to humans just by being around droppings.
Chicken farms can be fairly easily secured. With a combination of visual scare devices, sonic distress call emitters, ultrasonic disrupters and roost inhibitors other birds shouldn’t be a problem. If farmers just took this preventative action it could help contain the bird flu outbreak a good deal.

Histoplasmosis is a respiratory disease that may be fatal. It results from a fungus growing in dried bird droppings.

Psittacosis (parrot fever) is a rare disease that mainly affects parrots and parrot-like birds such as cockatiels, but can also affect other birds, such as pigeons. When bird droppings dry and become airborne people can inhale the fungus and become sick. In humans, symptoms include; dry cough, fever, headache, muscle ache, chills and sometimes pneumonia. Symptoms usually develop 7-14 days after exposure. Those at greatest risk include bird owners, pet shop employees, veterinarians and people with compromised immune systems. Psittacosis can be treated and is not transmitted from person to person.

Candidiasis is a yeast or fungus infection spread by pigeons. The disease affects the skin, the mouth, the respiratory system, the intestines and the urogenital tract, especially the vagina. It is a growing problem for women, causing itching, pain and discharge.

Cryptococcosis is caused by yeast found in the intestinal tract of pigeons and starlings. The illness often begins as a pulmonary disease and may later affect the central nervous system. Since attics, cupolas, ledges, schools, offices, warehouses, mills, barns, park buildings, signs, etc. are typical roosting and nesting sites, the fungus is apt to found in these areas.

St. Louis Encephalitis, an inflammation of the nervous system, usually causes drowsiness, headache and fever. It may even result in paralysis, coma or death. St. Louis encephalitis occurs in all age groups, but is especially fatal to persons over age 60. The disease is spread by mosquitoes which have fed on infected house sparrow, pigeons and house finches carrying the Group B virus responsible for St. Louis encephalitis.

Salmonellosis often occurs as “food poisoning” and can be traced to pigeons, starlings and sparrows. The disease bacteria are found in bird droppings; dust from droppings can be sucked through ventilators and air conditioners, contaminating food and cooking surfaces in restaurants, homes and food processing plants.

E.coli. Cattle carry E. coli 0157:H7. When birds peck on cow manure, the E. coli go right through the birds and the bird droppings can land on or in a food or water supply.

Besides being direct carriers of disease, nuisance birds are frequently associated with over 50 kinds of ectoparasites, which can work their way throughout structures to infest and bite humans. About two-thirds of these pests may be detrimental to the general health and well-being of humans and domestic animals. The rest are considered nuisance or incidental pests.

A few examples of ectoparasites include:

Bed bugs (Cimex lectularius) may consume up to five times their own weight in blood drawn from hosts which include humans and some domestic animals. In any extreme condition, victims may become weak and anemic. Pigeons, starlings and house sparrows are known to carry bed bugs.

Chicken mites (Dermanyssus gallinae) are known carriers of encephalitis and may also cause fowl mite dermatitis and acariasis. While they subsist on blood drawn from a variety of birds, they may also attack humans. They have been found on pigeons, starlings and house sparrows.

Yellow mealworms (Tenebrio molitor), perhaps the most common beetle parasites of people in the United States, live in pigeon nests. It is found in grain or grain products, often winding up in breakfast cereals, and may cause intestinal canthariasis and hymenolespiasis.

Damaging buildings and monuments due to the highly corrosive nature of acid in pigeon droppings
Damaging properties by pigeons roosting/breeding in roof spaces, rolled steel joists and inside factory units
Debris from roosting flocks building up, causing gutters and drains to block, damage to roofs and other structures, and creating potential fire hazards
Extensively damaging air-conditioning units and other roof top machinery
Pigeon droppings in/on industrial, commercial, and domestic buildings causing hygiene concerns
Introducing weeds and disease through pigeon droppings
Increasing the risk of disease and parasite transmission between feral, domestic and seabird populations
Escalating costs through public liability insurance from slipping on dropping build up.
Does your property have a pigeon problem?
Many property owners do not realise their building has a feral pigeon problem.
Factors which indicate a pigeon problem on your property include the following:
1 or 2 pigeons frequenting your yard/property
An accumulation of pigeon droppings on or around your property.
Once you recognise your property has a pigeon problem you will need to take action to prevent pigeons from roosting and nesting on/in the building.
If no action is taken the problem may escalate and more cost will be involved.
In the majority of cases, if corrective action is taken, the property should be pigeon proofed indefinitely.

Research has shown that only using lethal methods to control pigeons (culling) has its limitations as a long term control strategy.

Implementing non-lethal control techniques is the most effective long term solution to reducing the pigeon population, such as bird netting, spikes and shock track systems.

Remove sources of food and water such as:
Ensure that rubbish, especially from a food premises, is properly stored and food spillage is kept to a minimum.
Water is not readily available on site.
Destruction of nesting sites – pigeon nests are very simple and often consist of a few stiff twigs.
Look for nests along building ledges, bridge supports, air-conditioning units, window sills etc.
Pigeons are very persistent and destruction of the nest at regular intervals is often needed with a combination of other control methods.

Scare devices such as Bird kits and eagleye.
Application of gel products that pigeons find sticky and uncomfortable to stand on.
It will also be in the best interest for neighbouring properties to proof their property otherwise pigeons will quickly take up residence. This would move the problem rather than reduce the flock size.

Lethal control techniques only ever achieve short-term reduction (in most cases only 4 to 6 weeks).
The vacancies left by the removed pigeons can quickly be filled by juvenile birds.
After a few weeks the flocks may reach their earlier size or are even larger than before.

In many instances trapping does not have a long term effect on the pigeon population.
The number of birds caught and killed during trapping operations can be replaced as quickly as the birds are removed.
If the food source remains in situ the culling may act to increase pigeon numbers in a given area above the pre-cull number.
If you decide to implement a trapping program to remove resident pigeons the source of food must be removed, otherwise the trapping exercise may be pointless.

Licensed pest management technicians use a painless narcotic agent (Alpha-chloralose) which the birds eat and then go to sleep.
The theory is the birds will be collected while they are asleep. They are then humanely despatched (removed).
In some instances other birds which have accidentally consumed bait fly off after eating the food and this can lead to inhumane death.
It is important that if this control option is used professional advice is sought.
Again, you must remember to remove all sources of food otherwise the exercise may be pointless.

Licensed pest management technicians kill pigeons with a firearm to reduce pigeon numbers. This method of control can be effective where pigeon numbers are low and other options of control are limited.
Every situation will be assessed by the pest management technician to determine if shooting is a viable option.
As with all the above control methods, killing adults may also leave juvenile flightless birds in nests to die of starvation. 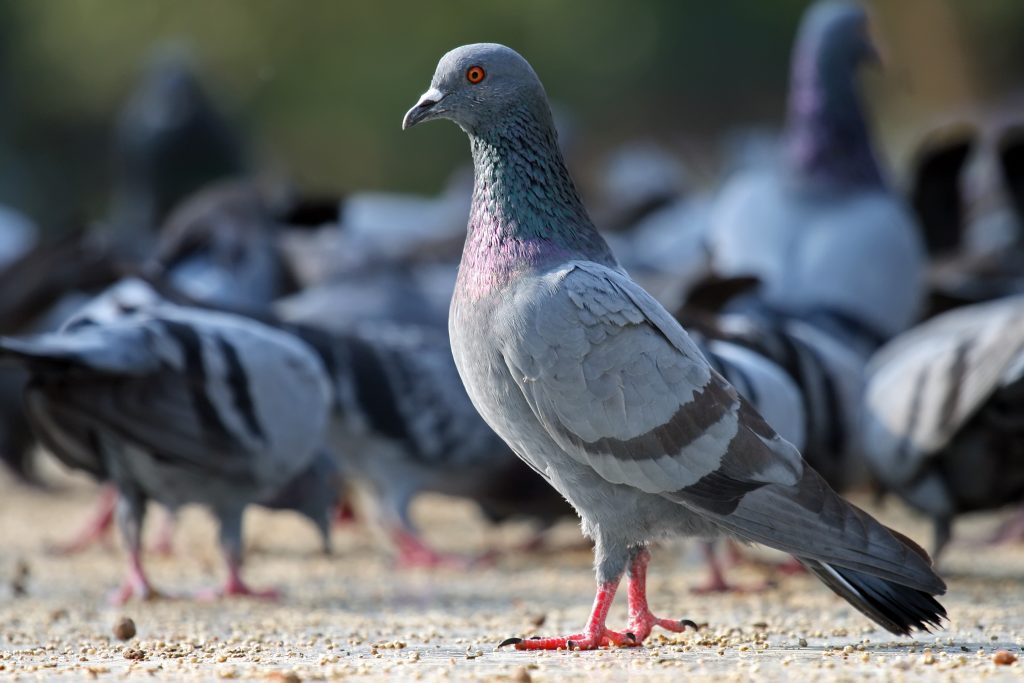