Starlings (Sturnus vulgaris) are native to Eurasia and northern Africa. It is now a global species having been introduced and become established in South Africa and North America. They were introduced into Australia and New Zealand in the mid 1880’s, both by acclimatisation societies and by others, in the vain hope that they might destroy insect pests.Starlings are common throughout the lower parts of New Zealand and are one of the most common species in lowland suburban and cleared agricultural areas of the south east of Australia. They also occur in open woodlands, irrigated pasture, feedlots, mulga, mallee, reed-beds around wetlands, coastal plains, and occasionally alpine areas. They avoid dense woodlands, forests, rainforest and arid regions. Their failure to colonise the apparently suitable habitat of south-west of Western Australia is due to continual control of emerging populations and the barrier of the Nullarbor Plains. Availability of water appears to be important to their survival hence high rainfall regions, irrigated areas, temporary surface water, and flooded drainage swamps support high densities.

Unlike many of the northern European native populations, starlings are relatively sedentary in Australia and New Zealand. They show no large-scale seasonal movements, although young individuals will travel distances of up to 2000 km when dispersing from breeding sites. In urban areas they are more sedentary with seasonal fluctuations in abundance due to high juvenile mortality and dispersal. However, small regional movements in response to food availability are common, particularly in cultivated and cleared agricultural areas.
After sunrise, starlings depart from large groups of up to 25 000 at roosting sites and disperse in smaller groups to a variety of feeding areas. They usually feed within 2 km of the roost, but can travel up to 80 km in areas of lower food availability. During autumn and winter, they form larger flocks, leave the roost earlier, travel greater distances and are less tied to particular feeding sites. During these seasons, short-term movements may centre on feeding areas rather than roosting or nesting locations.
Starlings require protein to live and breed with invertebrates comprising over half their daily food intake. They also consume fruit, berries, vegetables, meat and food scraps, and seeds of cultivated grains.
Starlings are seasonal breeders with a peak of breeding activity in August-September. They form pairs and nest in tree hollows, holes in the ground and gaps or crevices in cliffs, shrubs, tree stumps, fence posts and eaves and under rooves of buildings. Starlings produce 2-3 broods a year with an average of 4-6 eggs with each brood. The incubation period is 12 days and the young take 14 days to fledge.

Starlings can cause significant damage to horticultural industries, particularly cherries, grapes, blueberries, olives, stone fruits, apples, pears and a range of vegetable crops. They will also damage drying fruit and, occasionally, birds will remove fruit from drying racks. Cereal crops are susceptible when grain is freshly sown and during ripening. Grain from feedlots, storage areas, piggeries, dairies and poultry farms is often consumed. They can also carry many parasites and diseases which raise concern in food factories and industrial areas and are a potential risk to livestock industries. For example, they are implicated in carrying and in some cases transmitting Salmonella, Cryptococci, Newcastle Disease (poultry) and transmissible gastroenteritis (pigs), although the risks remain un-quantified. Environmental impacts centre round their aggressive competition for nest hollows which is potentially serious for some native species such as the double-eyed fig parrot and turquoise parrot.
Starlings are also considered to be a major nuisance in urban areas. They will nest under rooves where they can infest houses with bird lice, are often unwelcome in parks and shopping areas, especially at night where the roosting flocks can be unsightly, noisy and can contaminate the area with droppings.

Being such a widespread and common species, damage control is best achieved by action targeted to problem areas. Wide-scale population reduction is unlikely with currently available methods. Exclusion by netting to deny access to nesting and roosting areas is the most effective control method. Shock track installed to all ledges and parapets to stop birds from roosting.
Shooting and scare guns have only short term benefits at best with the birds rapidly adapting to the intrusion. 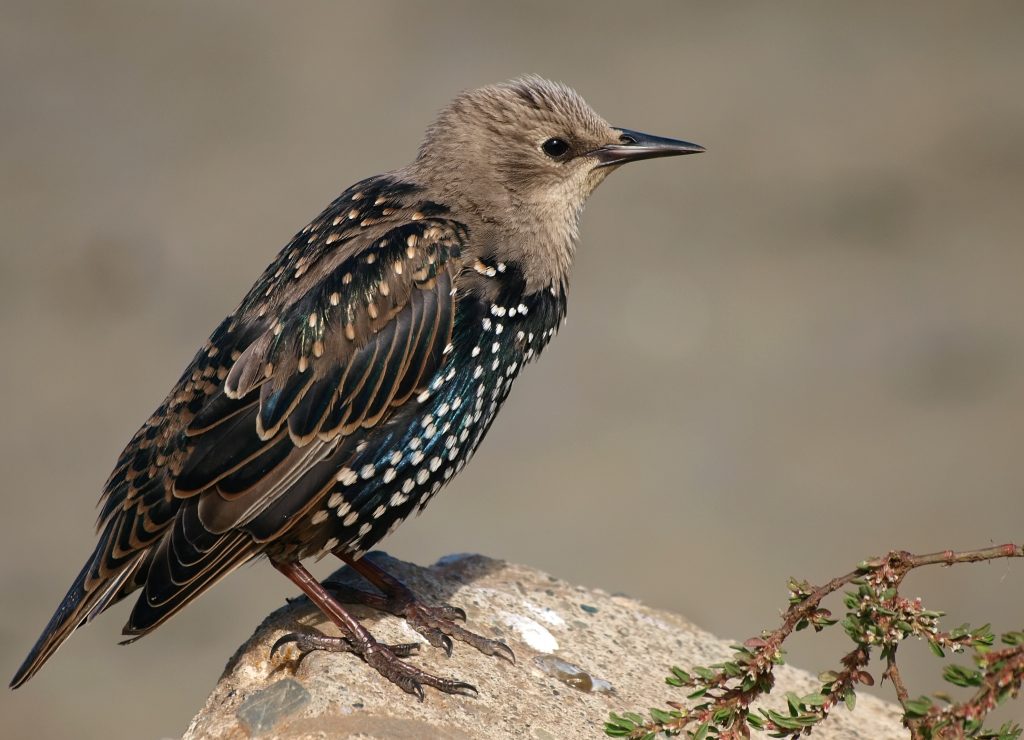